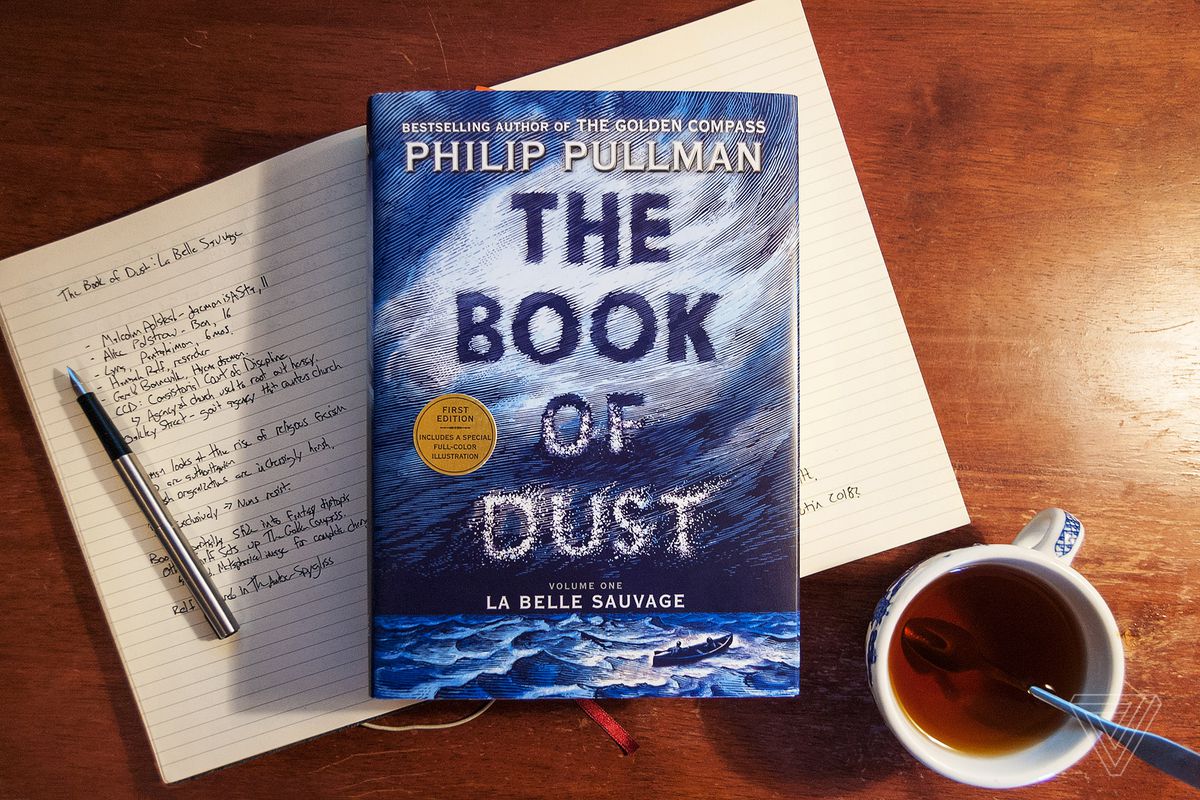 It’s been 17 years since Philip Pullman finished off his celebrated fantasy trilogy His Dark Materials. In trilogy’s first installment, The Golden Compass, he introduced readers to Lyra Belacqua, a girl from a parallel world, who sets off to rescue a missing friend. It was an uncompromising story about religion, authority, and individual freedom that earned acclaim around the world. Now, Pullman has recently released his long-awaited followup, The Book of Dust. The first volume, La Belle Sauvage, acts as a prequel to the original trilogy, and while it doesn’t quite live up to those novels, it’s still a story worth the long wait.

The world of His Dark Materials and The Book of Dust is one like ours, but just a little different: every human is linked to their own dæmon, an animal-shaped manifestation of their soul. The Golden Compass (or The Northern Lights, if you’re in England), depicts a world ruled by an oppressive church known as the Magisterium that Lyra must challenge when she sets off to find her kidnapped friend Roger. La Belle Sauvage is set a decade before that adventure, when Lyra is just an infant.

In her place, we’re introduced to Malcolm Polstead, a bright eleven-year-old who helps his parents at their Oxford pub, The Trout. He’s a smart, curious child, who clashes with Alice, an abrasive teenager who also works at the pub, and spends his time on the river in his canoe, which he named La Belle Sauvage. Two things set him on his journey: While at the pub, he overhears news that the local nuns have taken in an infant — Lyra — the daughter of two powerful figures: a man named Lord Asriel and a woman named Marisa Coulter. The next day, he sees a man arrested, and later finds an item that the man lost: a brass acorn with a message hidden inside.

The acorn is used as a way to covertly deliver messages to a local scholar who has access to an alethiometer, a truth-divining tool that figured prominently in Pullman’s previous trilogy. It connects Malcolm with the scholar, Hannah Relf, who belongs to a covert anti-Magisterium government agency known as Oakley Street. Both the church and a disgraced scientist named Gerard Bonneville seem strangely interested in Lyra, and when a massive flood overtakes Oxford, Malcolm and Alice spirit Lyra away from the rising waters and encroaching agents of the Magisterium.

A decade later in The Golden Compass, the Magisterium has established an oppressive control on society, stamping out ideas that it deems heretical. The church isn’t as powerful in this book, but it’s well on its way. Pullman uses effective, blunt-force imagery to show how the Magisterium is tightening its grip on society. Its security force, the Consistorial Court of Discipline (CCD), assassinates, assaults, and otherwise makes dissidents vanish, while it introduces a youth-oriented group to Malcolm’s school called the The League of St. Alexander, which encourages his classmates to report potentially heretical actions of their peers or parents.

Fantastical fascist movements aren’t anything new to YA fantasy literature, and the League is a group that reminded me quite a bit of the Inquisitorial Squad from J.K. Rowling’s Harry Potter and the Order of the Phoenix. Teachers who object are reprimanded or fired. But despite peer pressure, Malcolm resists the group’s recruitment efforts, taking solace in his own activities and routines with his dæmon Asta, and when Malcolm and Alice flee with Lyra in their arms, they’re pursued by the members of the CCD and the League.

A story about battling a rising tide of fascism feels timely as alt-right groups spring up across the world and authoritarian strongmen claim political power, and La Belle Sauvage plays this story out in a tense, thrilling manner. But Pullman largely abandons this setup in the second half of the novel, where Malcolm and Alice are on the run with Lyra. Pullman presents a fairy tale-like journey to bring Lyra to her father, where they encounter ancient, mythical creatures such as Old Father Thames and a malevolent fairy. Pullman uses Bonneville, who seems to want Lyra as leverage to get back into the Magisterium’s good graces, to drive the tension, but it’s a puzzling inclusion. While he is a genuinely terrifying character, Malcolm’s resistance against the church and its agents felt as though it has more resonance with the His Dark Materials trilogy, while Bonneville’s actions are far more chaotic.

Pullman’s characters begin to break down as well. Alice has a unique voice and become an an engaging character once she and Malcolm become friends, but Pullman largely uses her as a prop with which to boost up Malcolm, while Dr. Relf essentially vanishes from the narrative altogether. (She does appear in The Amber Spyglass, and presumably, we’ll see her in the next installment of the trilogy). This is disappointing, because Pullman is a master storyteller. His characters in His Dark Materials are exquisitely crafted, and I can’t help but feel as though they fall a bit flat in comparison. La Belle Sauvage is also torn between two competing directions: the rise of fascism, and the theological exploration of the nature of Dust, the particle discovered by Bonneville that helps explain consciousness, and which becomes a prominent part of the His Dark Materials trilogy. While these two elements seem like they ought to connect, they never quite mesh, and as a result, the book feels a bit scattered.

What holds the narrative together is Malcolm himself: a bright, curious boy who is as engaging as Lyra was in His Dark Materials. Pullman has been saying that this new trilogy is neither a prequel nor a sequel, but an equal to those books, and the same language can be applied to Malcolm. He might be different from Lyra, but he’s every bit as vibrant a hero. His journey is one of loyalty and courage: he transforms from a quiet child to a hero willing to take drastic, even violent measures to keep Lyra safe. Hopefully, he’ll be appearing in the next installment of the trilogy, which Pullman says will take place a decade after The Amber Spyglass. Despite its unfocused nature, Pullman is still an excellent storyteller, and La Belle Sauvage is certainly worth the nearly two decades that we’ve waited for it. But just as importantly, it’s a book that feels like a natural part of the His Dark Materials saga, and more likely than not, it’ll have me revisiting those books while I wait for the next installment, The Secret Commonwealth.